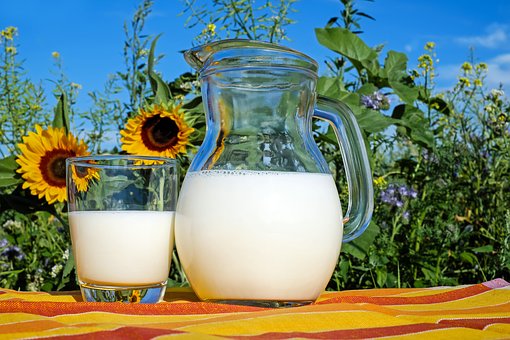 An article published in August 2006 in the Daily Mail covering research published in the Journal Of allergy, asthma And Immunology on raw milk:

British academics investigating why farmers' families suffer fewer allergies than others found that even occasional consumption of raw unpasteurised milk had a powerful effect.

Blood tests revealed that drinking raw milk more than halves levels of histamine, a chemical pumped out by cells in response to an allergen.

It is thought the milk contains bacteria that help to prime the immune system.

But the findings, published in the Journal Of allergy, asthma And Immunology, are controversial because unpasteurized milk is also a source of potentially fatal food-poisoning bugs.

Raw milk was banned from sale in Scotland 20 years ago, and can be sold by farmers in England and Wales only with labels clearly warning of the risks.

Here are details of other outbreaks arising from pasteurized milk. These outbreaks have been attributed to "inadequate pasteurization", or "post-pasteurization contamination". The number of cases are indicated:

As someone has rightly said: "Its too hot. It's not hot enough". What this means is that the temperature in pasteurization is too hot in that it kills off a lot of the goodness and inherent immunity in milk and its not hot enough because even at that temperature it will not kill all pathogenic bacteria. So there's the dilemma.

Other issues with pasteurized milk:

There has been a huge increase in the number of children suffering allergies in the past 30 years. One in three is now affected by eczema, hayfever or asthma - double the level 20 years ago.

And in the past ten years, the number of people needing emergency hospital treatment for severe allergic reactions has trebled to about 6,000 a year.

One of the biggest mysteries is why children raised on farms seem to suffer less than those in towns and cities, even though they are exposed to many more allergens.

When researchers at the University of London analysed the diet and health of 4,700 primary school children in Shropshire, they found that those who lived on farms had significantly fewer symptoms of asthma, hayfever and eczema.

The study looked at whether children were breast-fed and how often they were in contact with animals or played in barns. The greatest benefits were found to come from drinking raw milk.

Great, nations for thousands of years have been having fresh unprocessed milk from pasture fed animals and enjoying its benefits. Later:

The Chartered Institute Of Environmental health is pushing for a ban on sales of unpasteurised milk in England.

Food poisoning occurs all the time, from eating salad, to meat and other foods where contamination has taken place, or due to inadequate cooking. For example between 2000 and 2007 there were on average 85,000 total cases of food poisoning per year in UK.

When you dig further you find that as antibiotics are used in farm animals, the developed antibiotic resistance leads to outbreaks of food poisoning where inadequate cooking is combined with previous use of antibiotics in affected people.

Just because outbreaks occur, it does not mean you have to ban the food, it means you've got to make hygiene standards better. Currently, in the UK raw milk is legal and the government resisted a call for its ban, implementing instead regulations for better safety standards.

But John Barron, from Beaconhill Farm in Herefordshire, says demand is growing for raw milk produced by his 40-strong herd of Jersey cows.

He sells about 50 litres a week, at £1 a litre, from his farm and through markets.

"I've got lots of customers who give it to their children and there has never been a single case of food poisoning," he says.

"I get inquiries from as far as Manchester, Birmingham and Yorkshire from people wanting to know where they can get hold of raw milk."

The secret is out. People have cottoned on. They've figured it out.

More and more people are recognizing what real milk is. Its happening all across America, in the UK and across Europe. People are realizing that sound nutrition and good eating habits do away with most illnesses.

On a closing note, if you want to get raw milk you should ensure hygiene standards are maintained in farms that provide it. Fresh milk, just like any other type of food, can undergo contamination - its not something unique to fresh milk. So hygiene is important. The added advantage with fresh unprocessed milk is that it does have inherent immunity.