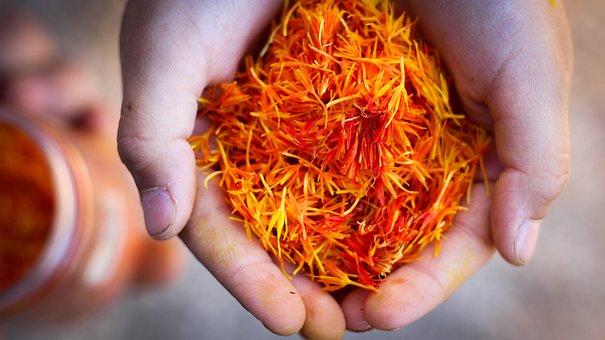 A study has found that the spice saffron holds the key to stopping vision loss in old age and helps to keep vision sharp. Findings suggest that the spice reverses age-related macular degeneration, or AMD, the most common cause of blindness in old people.

Researchers found that saffron had remarkable effects on the genes which regulate the performance of the eye's key vision cells. It not only protected these vision cells (photoreceptors) from damage, but also helped to slow and possibly even reverse the course of blinding diseases such as age-related macular degeneration (AMD) and retinitis pigmentosa (a group of genetic eye diseases).

Age-related macular degeneration is a disease associated with aging that gradually destroys sharp, central vision. There is no cure for the disease, but it can be slowed down.

For the trial, pensioners with age-related macular degeneration were given a daily saffron pill for three months followed by a dummy drug for a further three months. A second group took the supplements in the reverse order. Twenty-five took part in all.

"All patients experienced improvements in their vision while taking the saffron pill," the author said,

"But when they stopped taking it, the effect quickly disappeared."

"When they were tested with traditional eye charts, a number of them could read one or two lines smaller than before, while others reported they could read newspapers and books again."

"The chemistry of saffron is quite complex. It is well-known as an antioxidant but no one has explored its effects on eyesight before."

She explained that saffron was not simply an antioxidant but appeared to possess a number of other properties which were protective to vision - it appeared to affect genes which regulate the fatty acid content of the cell membrane, making the vision cells tougher and more resilient.

The author also said that a saffron diet had previously been found in animal models to protect the eye from the damaging effects of bright light, such as from sunlight, and was active in affecting genetic diseases of the eye, such as retinitis pigmentosa, which can cause life-long blindness in young people.

Saffron is one of the most expensive spices available and comes from the flower of the saffron crocus. It is used in Mediterranean and Asian cooking as a seasoning as well as for its coloring properties for both food and fabric. It contains a carotenoid dye, crocin, which gives food a rich golden-yellow color.

Saffron also has medicinal applications and has been used in traditional medicine for the treatment of a variety of ailments. The scholar Ibn al-Qayyim mentioned its healing benefits in his Prophetic Medicine. More recently, modern medicine has discovered saffron as having anti-carcinogenic, anti-mutagenic, and antioxidant-like properties.

Saffron has a strong and intense flavor and aroma, so use it sparingly. Use saffron threads in both sweet and savory dishes, and to flavor teas and other drinks.