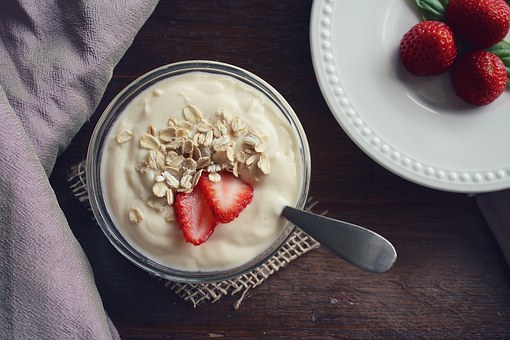 Yoghurt that has probiotic cultures added to it is associated with many health benefits including aiding digestion by helping the gut work properly, banishing bad breath, and helping to control yeast overgrowth.

'Live' yoghurt is made from milk that has been fermented by Lactobacillus bulgaricus, Lactobacillus acidophilus and Streptococcus thermophilus, specific bacteria that result in a thickened, semisolid product.

Yoghurt is a good source of calcium, vitamins and other minerals. Many people who are lactose-intolerant may be able to tolerate yoghurt because of its reduced lactose content. It is also easily digested and contains essential amino acids that the body needs.

Yoghurt is considered a probiotic because it contains bacteria that produce lactic acid. The consumption of these bacteria is beneficial for boosting the immune system, enhancing intestinal tract health, lessening the symptoms of lactose intolerance, and reducing the risk of certain cancers.

Studies on Some of the health Benefits of Yoghurt