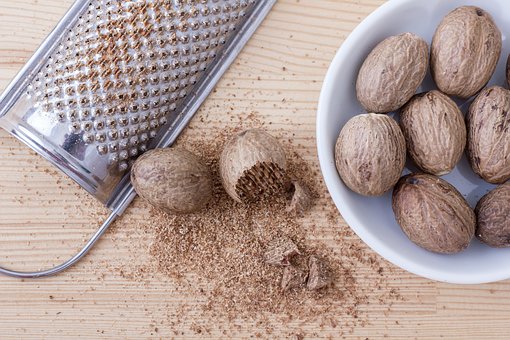 Advertisement. Report if inappropriate.
Shaykh Muhammad bin Ibraaheem Aal as-Shaykh (rahimahullaah), quoted the research of previous scholars quoting the concensus amongst the four madhhabs on the unlawfulness of nutmeg due to its intoxicating nature. Further, the Permanent Committee For Research and Verdicts quoted Shaykh Muhammad (quoting the previous research) in their Fataawee (v.22/pp.162-168), signed by Shaykh Ibn Baaz (president), Shaykh 'Abdur-Razzaaq 'Afeefee (vice-president), and others, and dated 4/11/1376.

The above information was provided by Moosaa ibn John Richardson.

The following research is to establish that nutmeg is an intoxicant and is used for recreational use.

Nutmeg is a common household spice sometimes abused for its hallucinogenic properties. This abuse is well reported in the medical literature over the last century. Ingestion of less than one tablespoon can produce symptoms similar to those of an anticholinergic toxic episode. Common presenting complaints are hallucinations, palpitations, and feelings of impending doom. We report a case of intentional nutmeg intoxication in a 23-year-old college student. As laboratory tests are usually normal, this diagnosis should be considered in patients presenting with an acute psychotic break accompanied by symptoms resembling an anticholinergic toxic episode. Treatment is primarily supportive once other life-threatening conditions have been ruled out.

Nutmeg is a spice that contains volatile oils comprised of alkyl benzene derivatives (myristicin, elemicin, safrole, etc.), terpenes and myristic acid. Nutmeg has a long history of abuse. This study describes the nutmeg ingestion calls received by Texas poison centers from 1998 to 2004. There were 17 calls involving nutmeg ingestion, of which 64.7% involved intentional abuse. When abuse and non-abuse ingestions were compared, abuse ingestions were more likely to involve males (100 versus 66.7%) and adolescents (55.6 versus 16.7%). The majority of both abuse and non-abuse calls were managed outside of health care facilities (54.5 and 66.7%, respectively). None of the ingestions resulted in more than moderate clinical effects or death.

nutmeg poisoning is rare but probably underreported and should be considered in recreational substance users with acute psychotic symptoms as well as central nervous system neuromodulatory signs that may mimic in part an anticholinergic hyperstimulation.

BACKGROUND: Unpleasant and frightening side effects associated with the abuse of nutmeg occasionally generate emergency department referrals. We report a young patient's first-time experience with nutmeg and review the mechanisms of its toxicity. CASE REPORT: A 13-year-old female ingested 15-24 g of nutmeg over a 3-hour period and smoked and shared 2 joints of marijuana. To facilitate ingestion, the nutmeg was put into 00-000 gelatin capsules. Bizarre behavior and visual, auditory, and tactile hallucinations developed. She also experienced nausea, gagging, hot/cold sensations, and blurred vision followed by numbness, double, and "triple" vision, headache, and drowsiness. Nystagmus, muscle weakness, and ataxia were present. Her vital signs and laboratory tests were normal. She received 50 g of activated charcoal and except for complaints of dizziness and visual changes, her 2-day admission was uneventful. The central nervous system activity of nutmeg is often postulated to result from biotransformation of its chemical components to amphetamine-like compounds, but this has not been proven. Nutmeg contains several compounds with structural similarities to substances with known central nervous system neuromodulatory activity.

Nutmeg is an easily obtainable spice that has been widely used domestically for centuries because of its psychotropic effects. Several cases of nutmeg poisoning, including one fatality, have been published. The active ingredients are volatile oils where myristicin and elemicin are thought to be the most important constituents. These have anticholinergic and psychotropic properties and are metabolised to compounds similar to amphetamine. We present the first reported case of nutmeg poisoning in Norway.

And then some other research papers establishing the same. The intoxicating nature of nutmeg is thoroughly established.