Sage As A Medicinal Herb

Posted by SoundHealth on Wednesday, November 18, 2009 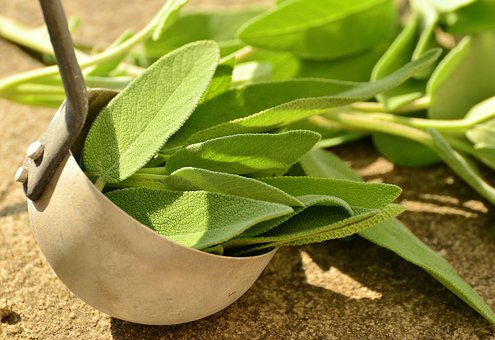 Sage is a potent herb with many uses both in the kitchen and medicinally. Its range of health-enhancing properties includes improving brain health, regulating hormones, plus it is an antiseptic, anti-inflammatory and may even prevent Alzheimer's disease.

The health benefits of sage are similar to those attributed to other members of the mint family, especially to rosemary. It contains a variety of volatile oils, flavonoids, and phenolic acids, including the phenolic acid named after rosemary - rosmarinic acid. The rosmarinic acid in sage and rosemary functions as an antioxidant, reducing inflammatory responses in the body.

Sage is also anti-bacterial and anti-mucosal so it is useful for fighting colds, and clearing catarrh as well as fighting off germs. Its antiseptic properties make it excellent for healing gum problems and sore throats when drunk as a tea or used as a gargle.

Sage has several ways of improving mind and mood. Research published in 2003 found that sage is an outstanding memory enhancer, particularly short-term memory, as in word-recall tests. The dried root of Chinese sage contains active compounds similar to those used to combat the formation of plaques in the brain, found in Alzheimer's disease.

Sage contains thujone, a phytoestrogen which helps regulate the menstrual cycle and relieves many unpleasant menopausal symptoms, including hot flushes.