Posted by SoundHealth on Monday, September 14, 2009 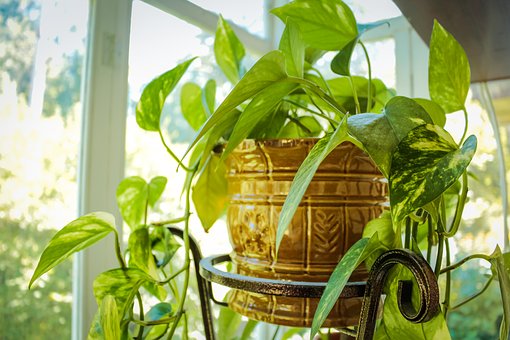 A study has revealed that common houseplants are an effective way to reduce ozone, the main component of indoor air pollution.

Ozone, or smog, is a highly reactive, colorless gas formed when oxygen reacts with other chemicals. Although ozone pollution is most often associated with outdoor air, the gas also infiltrates indoor environments like homes and offices. Ozone can be released by photocopy machines, laser printers, ultraviolet lights, and some electrostatic air purification systems, all of which contribute to increased indoor ozone levels.

Some of the many toxic effects of ozone on humans are pulmonary edema (fluid in the lungs), hemorrhage, inflammation, and reduction of lung function.

A research team from the Pennsylvania State University studied the effects of three common houseplants on indoor ozone levels. They chose snake plant (Sansevieria trifasciata), spider plant (Chlorophytum comosum), and golden pothos (Epipremnum aureum) for the experiment because of the plants' popularity, and their reported ability to reduce other indoor air pollutants. The plants were studied to determine their effectiveness in reducing ozone concentrations in a simulated indoor environment.

To simulate an indoor environment, the researchers set up chambers in a greenhouse equipped with a charcoal filtration air supply system in which ozone concentrations could be measured and regulated. Ozone was then injected into the chambers, and the chambers were checked every 5 to 6 minutes. The data revealed that ozone depletion rates were higher in the chambers that contained plants than in the control chambers without plants, but there were no differences in effectiveness among the three plants.

"Because indoor air pollution extensively affects developing countries, using plants as a mitigation method could serve as a cost-effective tool in the developing world where expensive pollution mitigation technology may not be economically feasible", concluded the authors.

Indoor air pollution has been ranked as one of the world's greatest public health risks, because many people in industrialized countries spend the majority of their time indoors. In 1998 the United Nations Development Program estimated that more than two million people die each year due to the presence of toxic indoor air, while other studies estimate that 14 times as many deaths occur worldwide from poor indoor air quality compared with outdoor air pollution.