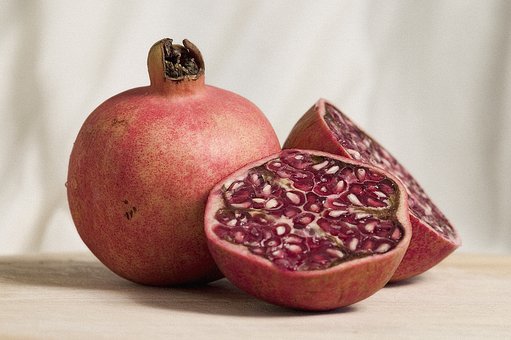 This study aimed at evaluating the anti-inflammatory properties of a pomegranate fruit husk (PomH) polyphenolic extract, rich in punicalagin, using Caco-2 cells, an in vitro model of human intestinal epithelium. Differentiated cells in bicameral inserts were pretreated or not with a PomH extract or punicalagin, as reference, at the apical side, representing the intestinal lumen. Inflammation was then induced with a cocktail of cytokines (Il-1?, TNF? and IFN?) and LPS. After 24 h incubation, 3 pro-inflammatory markers, i.e., interleukin (IL)-6, IL-8 and monocyte chemoattractant protein (MCP)-1, were assayed both at their gene transcription (qRT-PCR) and secretion (ELISA) levels. As previously described, the pro-inflammatory cocktail significantly stimulated these 3 markers, at the gene transcript and secretion levels. In inflamed cells, a significant down-regulation of the transcription of the genes encoding IL-6 and MCP-1 was observed in the presence of the PomH extract or punicalagin, while IL-8 transcription was unaffected. Both treatments also decreased the amounts of the 3 proteins with dose-response effects, but only in the apical compartment. A lowered ELISA response was also observed when either IL-6, IL-8 or MCP-1 were mixed with punicalagin in a cell-free culture medium, indicating a direct molecular interaction. In conclusion, the punicalagin-rich PomH extract tested showed anti-inflammatory properties in the Caco-2 in vitro intestinal model. It acted both on the pro-inflammatory gene transcription and protein levels, the later phenomenon being possibly due to a direct molecular trapping. These data suggest that pomegranate husk could be an interesting natural source contributing to prevent intestinal chronic inflammation.