Ibn al-Qayyim: Chicory Is Excellent for the Stomach

Posted by SoundHealth on Thursday, January 08, 2009 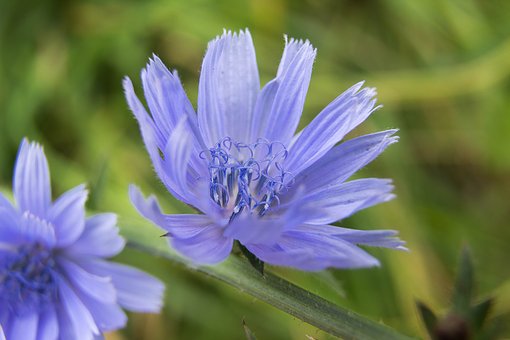 Ibn al-Qayyim mentioned in his Prophetic Medicine the benefits of the vegetable and salad leaf chicory. He said that it was:

Chicory is known around the world as two different plants: common chicory (Cichorium intybus) and curly endive (Cichorium endivia). Common chicory is a bushy herb with blue, lavender or white flowers and is sometimes called root chicory, as the roots produce an edible vegetable. Endive or leaf chicory produces white leaves and is usually grown indoors or underground to prevent the leaves from turning green and opening up.

Chicory has a mildly bitter taste. It produces a vegetable comprising of a white bulb of tightly packed elongated cones of overlapping white leaves. It can also be grown for its leaves, which are eaten raw in salads, or can be cooked.

The leaves of chicory or endive contain calcium, phosphorus, iron, carotene, thiamine, riboflavin, niacin and Vitamin C. The flowers and root contain a glucoside chichorin and the bitter substances, lactucin and intbin.

Root chicory is commonly dried and ground to produce a coffee substitute, as two of the substances found in it, lactucin and lactucopicrin have similar stimulant effects to coffee.

Chicory is well known for its toxicity to internal parasites. A study indicated that ingestion of chicory by farm animals resulted in reduction of parasites. [1]

One study published in the Journal of nutrition reported that chicory reduced cholesterol levels and increased the ratio of HDL (the good stuff) to LDL (the bad stuff) in the blood of tested animals. [2]

A 1984 study demonstrated that daily intake by diabetics of a large amount of the fructo-oligosaccharides and insulin contained in chicory (i) reduced the glucose rate in blood, (ii) decreased serum LDL cholesterol levels, and (iii) did not change the levels of triglycerides or HDL cholesterol. [3]