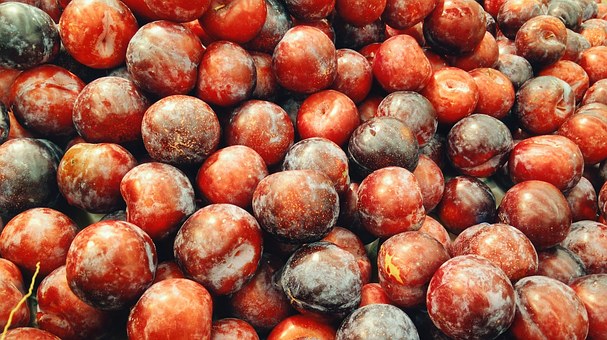 Advertisement. Report if inappropriate.
Scientists at Texas AgriLife Research are discovering the high levels of healthy nutrients in plums, comparing them to superfruits such as blueberries. They were found to match or exceed the much-talked about blueberries in antioxidants and phytonutrients associated with disease prevention.

Researchers acknowledge that blueberries remain a good nutritional choice, however they add that the relatively inexpensive plum contains about the same amount of antioxidants as a handful of more expensive blueberries.

"People tend to eat just a few blueberries at a time- a few on the cereal or as an ingredient mixed with lots of sugar,

But people will eat a whole plum at once and get the full benefit."

Discovery of the plum's benefits - along with that of fellow stone fruits, the peach and the nectarine - came after the researchers measured at least five brands of blueberries on the market. Against those numbers, the team measured the content of more than 100 different types of plums, nectarines and peaches.

The first comparison was for antioxidants, molecules that sweep through a body looking for free radicals to knock out. Free radicals are atoms or molecules that lurk where diseases like cancer and heart disease are found, and if left they will cause problems that lead to these diseases.

"Knowing that we had all these varieties with high levels of antioxidants, then the possibility of preventing these diseases would also be high with their consumption, so we went to the next step - how these compounds could actually inhibit chronic diseases," Dr Cisneros

The team examined the full content of plums and peaches, then tested the effect of the compounds they found on breast cancer cells and cholesterol in the lab.

For example, one benefit the team found was that the phytonutrients in plums inhibited in vitro breast cancer growth without adversely affecting normal cell growth.

Bottom line from the researchers:

They added that blueberries, peaches and nectarines have similar benefits to plums.

As a final note, fruit should be eaten on its own as it digests very quickly. If you eat fruit, do not eat anything else for half an hour. And if you have had a meal, do not eat fruit until around three hours afterwards.