Peppers are Packed with Beneficial Antioxidants 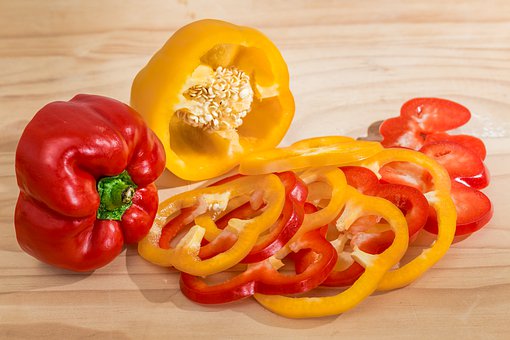 The versatile bell pepper is a rich source of some of the best nutrients available, including Vitamin C, Beta-carotene and lycopene, all which have a wide range of health benefits.

Peppers are from the Capsicum family, which includes varieties ranging from the sweet bell pepper to hot chili peppers. Bell peppers, also known as sweet peppers, come in many different colors; the most common ones are red, green, yellow and orange. Bell peppers are not 'hot' like chili peppers, as they contain a recessive gene that eliminates capsaicin, the compound responsible for the 'hotness' found in other peppers.

Peppers are rich in Vitamin C and a good source of Beta-carotene and B vitamins. Beta-carotene (the precursor of vitamin A) and Vitamin C are powerful antioxidants that work together to offer protection against cell-damaging free radicals. Peppers also contain flavonoids and capsaicinoids, inflammation-reducing phytochemicals.

Red peppers contain lycopene, a carotenoid whose consumption has been associated with reducing the risk of prostate cancer and cancers of the cervix, bladder and pancreas. Recent studies suggest that individuals whose diets are low in lycopene-rich foods are at greater risk for developing these types of cancers.

One study found that capsiates, one of the major beneficial compounds in sweet peppers, induced cell death (apoptosis) in skin cancer cells.

A study has associated vitamin C-rich foods, such as bell peppers, with protecting against inflammatory polyarthritis, a form of rheumatoid arthritis involving two or more joints. The findings reveal that subjects who consumed the lowest amounts of vitamin C-rich foods were more than three times more likely to develop arthritis than those who consumed the highest amounts.

Bell peppers appear to have a protective effect against cataracts, possibly due to their Vitamin C and Beta-carotene content. Italian researchers compared the diets of hospital patients who had cataracts removed with patients who had not undergone the operation. Certain vegetables, including sweet peppers, reduced the cataract operation risk.

The red variety of bell pepper also supplies the phytonutrients lutein and zeaxanthin, which have been found to protect against macular degeneration, the main cause of blindness in the elderly.