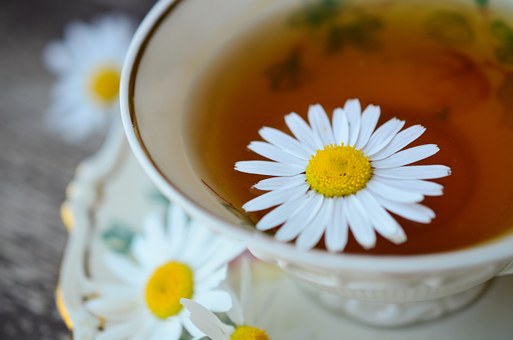 Advertisement. Report if inappropriate.
Chamomile has long been known for its calming effects, but a new study has found that drinking chamomile tea may also help to regulate blood sugar.

Researchers studied the effects of chamomile tea on diabetic rats. They found that in the rats that were given chamomile, a lesser amount of glucose was turned into sorbitol (a sugar alcohol). Excess sorbitol can cause damage to kidneys, eyes and nerve cells. The enzymes primarily responsible for this kind of damage in diabetics were also inhibited in the chamomile rats, as well as an overall decrease in blood glucose compared to the other rats.

"Matricaria chamomilla L., known as "chamomile", has been used as an herbal tea or supplementary food all over the world. We investigated the effects of chamomile hot water extract and its major components on the prevention of hyperglycemia and the protection or improvement of diabetic complications in diabetes mellitus.

Hot water extract, esculetin and quercetin have been found to show moderate inhibition of sucrase with IC50 values of 0.9 mg/mL and 72 and 71 ¼M, respectively. In a sucrose-loading test, the administration of esculetin (50 mg/kg body weight) fully suppressed hyperglycemia after 15 and 30 min, but the extract (500 mg/kg body weight) and quercetin (50 mg/kg body weight) were less effective. On the other hand, a long-term feed test (21 days) using a streptozotocin-induced rat diabetes model revealed that the same doses of extract and quercetin showed significant suppression of blood glucose levels. It was also found that these samples increased the liver glycogen levels. Moreover, chamomile extract showed potent inhibition against aldose reductase (ALR2), with an IC50 value of 16.9 ¼g/mL, and its components, umbelliferone, esculetin, luteolin, and quercetin, could significantly inhibit the accumulation of sorbitol in human erythrocytes.

These results clearly suggested that daily consumption of chamomile tea with meals could contribute to the prevention of the progress of hyperglycemia and diabetic complications."

For diabetics, stabilizing blood sugar is crucial for good health, but even people without diabetes can benefit from maintaining normal blood sugar levels. Blood sugar swings can result in fatigue, sugar cravings and insulin resistance, among other symptoms. Taking measures to regulate blood sugar can actually prevent the onset of diabetes in healthy individuals, and it will also help you feel more energetic and maintain a healthy weight.

Chamomile tea is a mild tea with a taste and scent similar to apples. It is made by steeping the dried flowers of the plant in hot water for a few minutes, and has a variety of uses such as calming stress, soothing anxiety, inducing sleep and reducing stomach cramps.