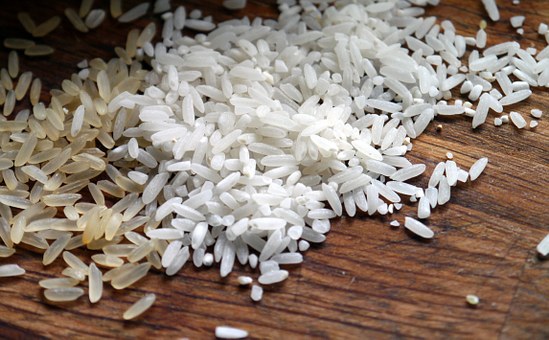 Rice is naturally high in fiber and other healthful nutrients so is generally a healthful addition to the diet. However, not all rice is equally nutritious, and brown rice or whole grain rice is nutritionally superior to white rice. This is because whole grain brown rice contains all three layers of the kernel still intact, making it rich in antioxidant plant chemicals. It also has five times the fiber of white rice.

Research has now found that brown rice offers protection from high blood pressure and atherosclerosis ("hardening of the arteries").

Tests revealed that brown rice contains a compound that protects the heart from a damaging protein, but that compound is removed when it is processed and polished to make white rice.

"Brown rice might have an advantage over white rice by offering protection from high blood pressure and atherosclerosis or 'hardening of the arteries'", one of the study authors said.

They found that a component in a layer of tissue surrounding grains of brown rice may work against angiotensin II. Angiotensin II is an endocrine protein and a known culprit in the development of high blood pressure and atherosclerosis.

This layer, which is located between the white center of the grain and the brown fibrous outer layer, is rich in oligosaccharides and dietary fibers, making it particularly nutritious. However, when brown rice is polished to make white rice, this layer is stripped away and the rice loses some of its nutrients.

"This suggests that the sub-layer of rice offers protection against high blood pressure."

Researchers in the U.S. and Japan said the findings could help to explain why cases of heart disease are lower in Japan - where most people eat rice daily.

"Our research suggests that there is a potential ingredient in rice that may be a good starting point for looking into preventive medicine for cardiovascular diseases," they said. "We hope to present an additional health benefit of consuming half-milled or brown rice [as opposed to white rice] as part of a regular diet."