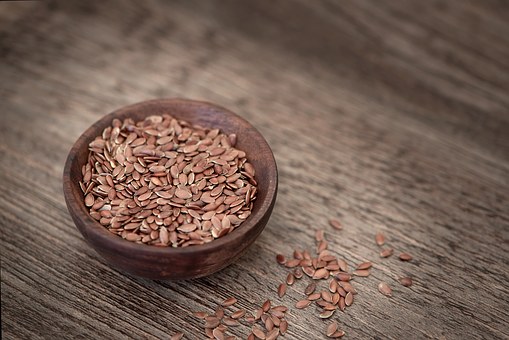 Advertisement. Report if inappropriate.
Flax seeds are a healthy super seed that contain many health-boosting nutrients. Flaxseed is the richest plant source of alpha-linolenic acid, one type of omega-3 fatty acid. It is also a superb source of lignans, which are plant compounds that act like a weak form of estrogen. The body converts these into hormone-like substances that balance out fluctuating hormone levels, and several studies have shown that flaxseed inhibits the formation of colon, breast, skin and lung tumors.

A new study has now discovered that a diet enriched with flaxseed decreases severity of ovarian cancer and increases survival rates in hens, which are the only animal to develop ovarian cancer in the same way as humans.

"The chicken is the only animal that spontaneously develops ovarian cancer on the surface of the ovaries like humans," the author said.

"In this study, we evaluated how a flaxseed-enriched diet affected 2-year-old laying hens (hens that have ovulated as many times as a woman entering menopause)."

The results showed that hens fed a flaxseed-enriched diet for one year experienced a significant reduction in late-stage ovarian tumors.

"Most women diagnosed with ovarian cancer have a very poor prognosis because they are not diagnosed until stage 3 or 4 when the cancer has metastasized and spread to other parts of the body," the study author said.

"In hens fed flaxseed, we found that more tumors were confined to the ovary and they had less metastatic spread,"

"This is an important finding as the metastases that accompany late-stage ovarian cancer are the main cause of death from this disease. If the cancer is found at an early stage, when the tumor is still confined to the ovary, women have a much better prognosis and more treatment options." the study author said.

Ultimately, the flaxseed-enriched diet helped the birds maintain a healthy weight and resulted in less sickness and death.

"Through this research, we have proven that flaxseed supplementation for one year is able to reduce the severity of ovarian cancer in hens,"

"These findings may provide the basis for a clinical trial that evaluates the efficacy of flaxseed as a chemosuppressant of ovarian cancer in women."

Flax seed is available a seeds or as flaxseed oil. Buy flax seeds whole and grind them fresh when required, as once ground, the nutritional value of flax seeds deteriorates quickly. Ground flax seeds are also more easily digestible and are more nutritionally beneficial than whole flax seeds. Flaxseed oil is easily destroyed by heat, light and oxygen, so it should be kept refrigerated and eaten raw, not used to cook with.