Posted by SoundHealth on Sunday, February 08, 2009 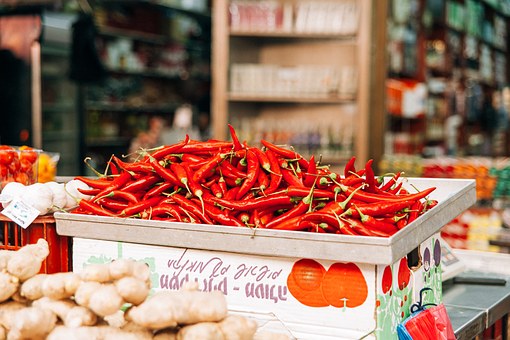 Chili peppers are known for their heat and are frequently used to add spice and zest to dishes. But these fiery plants also have many benefits for health, including fighting cancer and providing pain relief.

The heat caused by the pepper is due to a group of phytochemicals called capsaicinoids, and capsaicin is the primary one thought to be responsible for the pepper's health benefits. It works by acting on pain receptors in the mouth and throat, and its effects vary depending on the heat intensity of the pepper.

Chili peppers come in hundreds of different varieties, each with a unique flavor, color, shape and heat factor. Generally speaking, the hotter the pepper, the more capsaicin it contains.

About 80 percent of the capsaicin in a chili pepper is in its ribs and seeds, which is why much of the heat is removed when these items are taken out. Generally, larger chili peppers are milder because they contain fewer seeds and white membrane in proportion to their size.

Here are a few of the health benefits of chili peppers:

A study published in Cancer Research found that capsaicin caused cancer cells to commit suicide. The substance caused almost 80 percent of prostate cancer cells to die in mice, and prostate tumors treated with capsaicin were about one-fifth the size of those in untreated mice.

"Capsaicin, when given orally, significantly slowed the growth of PC-3 prostate cancer xenografts as measured by size.

In summary, our data suggests that capsaicin, or a related analogue, may have a role in the management of prostate cancer."

A topical form of capsaicin is a recognized treatment for osteoarthritis pain, and may also help alleviate pain from long-term nerve damage caused by diabetes (diabetic neuropathy). Capsaicin is known to inhibit Substance P, a neuropeptide that is the key transmitter of pain to the brain. Substance P can cause swelling of nerve fibers, which may result in headaches and sinus symptoms. Studies have found that capsaicin both relieves and prevents cluster headaches, migraine headaches and sinus headaches.

"Capsaicin, the active principle of hot chili pepper, is thought to selectively stimulate unmyelinated C fibre afferent neurons and cause the release of substance P. Prolonged application of capsaicin reversibly depletes stores of substance P, and possibly other neurotransmitters, from sensory nerve endings. This reduces or abolishes the transmission of painful stimuli from the peripheral nerve fibres to the higher centres. In clinical studies of patients with post-hepatic neuralgia, diabetic neuropathy or osteoarthritis, adjunctive therapy with topical capsaicin achieved better relief than its vehicle in most studies. In a single trial, topical capsaicin in demonstrated similar efficacy to oral amitriptyline in patients with diabetic neuropathy. Topical capsaicin is not associated with any severe systemic adverse effects. However, stinging and burning, particularly during the first week of therapy, is reported by many patients. Topical capsaicin merits consideration as adjuvant therapy in conditions such as post-herpetic neuralgia, diabetic neuropathy and osteoarthritis, where the pain can be chronic and difficult to treat."

Capsaicin is a potent anti-inflammatory agent. It works by inhibiting Substance P, which is associated with inflammatory processes. Capsaicin is being studied as a potential treatment for sensory nerve fiber disorders, including pain associated with arthritis and psoriasis. When animals injected with a substance that causes inflammatory arthritis were fed a diet containing capsaicin, they had delayed onset of arthritis, and also significantly reduced paw inflammation.

An extract from the abstract states:

"Additional feeding of spice principles-capsaicin (from red pepper) (5 mg/kg bw/day) or curcumin (from turmeric) (30 mg/kg bw/day) along with dietary lipids delayed the onset of the disease and also lowered the extent of inflammation in arthritis arrested further progression of the disease. Curcumin and capsaicin feeding to arthritic rats also lowered paw inflammation. This beneficial effect of spice principles was observed irrespective of the nature of the dietary lipids fed to the rats. These studies indicated that the dietary n-3 polyunsaturated fatty acids, capsaicin, and curcumin can decrease the incidence, delay the onset and reduce the extent of inflammation of adjuvant-induced arthritis in rats."

A study published in the American Journal of Clinical Nutrition in 2006 showed that chili peppers could aid in lowering the risk of diabetes, as well as weight control. The study found that the amount of insulin required to lower blood sugar after a meal was reduced if the meal contained chili pepper.

These benefits on insulin were further improved when the body mass index was increased. In overweight people, not only do chili-containing meals significantly lower the amount of insulin required to lower blood sugar levels after a meal, but chili-containing meals also result in a lower ratio of C-peptide/ insulin, an indication that the rate at which the liver is clearing insulin has increased.

BACKGROUND: Animal and some human studies have indicated that the consumption of chili-containing meals increases energy expenditure and fat oxidation, which may help to reduce obesity and related disorders. Because habitual diets affect the activity and responsiveness of receptors involved in regulating and transporting nutrients, the effects of regular consumption of chili on metabolic responses to meals require investigation.

OBJECTIVE: The objective was to investigate the metabolic effects of a chili-containing meal after the consumption of a bland diet and a chili-blend (30 g/d; 55% cayenne chili) supplemented diet.

In simplified terms, regular consumption of chili may reduce high levels of insulin in the blood after mealtimes.