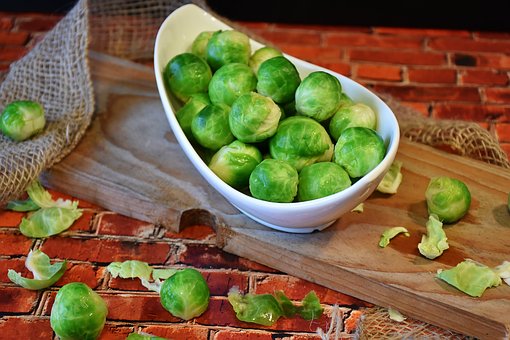 Advertisement. Report if inappropriate.
Brussels sprouts contain beneficial nutrients that boost the body's defenses and protect against diseases. Research has proven that these cruciferous vegetables protect against cancer by promoting healthy DNA, and have detoxifying effects.

Brussels sprouts belong to the Brassica family, and are closely related to cabbage and broccoli. They are rich in many valuable nutrients, including being an excellent source of Vitamin C and vitamin K. They are a very good source of folate, Vitamin A, manganese, dietary fiber, potassium, vitamin B6 and B1, and a good source of omega-3 fatty acids, as well as many other nutrients. In addition to these nutrients, Brussels sprouts contain numerous disease-fighting phytochemicals.

Brussels sprouts are rich in a group of substances known as glucosinolates. These glucosinolates transform into the chemicals isothiocyanates and indoles in the body. One of the effects of these substances is to boost the livers ability to deal with potentially toxic substances. A study has shown that compounds derived from Brussels sprouts seem to help the liver disarm chemicals known to have cancer-inducing potential in the body.

Evidence suggests that Brussels sprouts may help keep the body free from cancer, through their healthy effects on DNA. DNA controls the division of each cell in the body. Damage to the DNA in a cell may cause it to replicate much more rapidly than normal, and this change that is thought to be integral to the cancer-causing process. Studies show that extracts of Brussels sprouts have the ability to help protect DNA from damage.

Other studies have shown that higher consumption of brassica vegetables is linked to reduced cancer risk.

The beneficial compound sulforaphane is released by Brussels sprouts and other cruciferous vegetables, and has been proven to trigger the liver to produce enzymes that detoxify the body of cancer-causing chemicals. These have been shown to inhibit chemically-induced breast cancers in animal studies. Research published in the Journal of Nutrition shows that sulforaphane can halt the development of breast cancer cells, even in the later stages of their growth.

Brussels sprouts are a good source of folic acid, a B-vitamin essential for proper cellular division, and which is important during pregnancy as it helps to divide the fetus' nervous system cells properly. Deficiency of folic acid during pregnancy has been linked to several birth defects, including neural tube defects like spina bifida.

Brussels sprouts are an excellent source of Vitamin C, the body's primary water-soluble antioxidant. Vitamin C supports immune function and the manufacture of collagen, a protein that forms the basis of body structures including the skin, connective tissue, cartilage, and tendons. A study conducted on nearly 20,000 men and women in England found that people with the highest Vitamin C levels had half the risk of dying from heart disease, stroke or cancer.