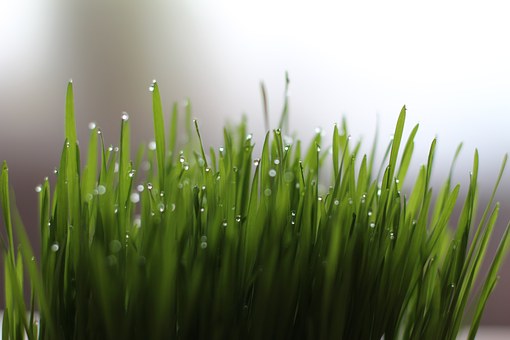 Green superfoods are one of the most powerful groups of superfoods available. They have the highest concentrations of easily digestible nutrients, fat-burning compounds, vitamins and minerals to protect and heal the body. They beneficial substances include proteins, protective chemicals and healthy bacteria which help to build strong muscles and tissues, aid digestive system function and protect against disease and illness more effectively.

Green superfoods are extremely rich in chlorophyll - the pigment that gives plants their green color. The molecular structure of chlorophyll is very similar to that of human blood and studies show that when this is consumed, the production of hemoglobin in blood is increased. Higher amounts of hemoglobin in the bloodstream means more oxygen-rich blood, the first and most important element that cells need to thrive.

Here are some of the most nutrient-dense green superfoods:

Wheatgrass is the sprouted grass of a wheat seed and unlike the whole grain, it no longer contains gluten or other allergic agents because it has been sprouted. Wheatgrass has a super-alkalizing effect and is excellent for promoting healthy blood. It normalizes the thyroid gland to stimulate metabolism thus aiding digestion and promoting weight loss due to its high enzyme content and cleansing effect.

Barley grass is made in the same way as wheatgrass, but from the sprouted seed of barley. It also has very similar benefits to wheatgrass - it is extremely alkalizing and high in chlorophyll. Barley grass contains 11 times more calcium than cows milk, 5 times more iron than spinach and 7 times more Vitamin C and bio-flavonoids than orange juice. It also contains significant amounts of vitamin B12, a key nutrient for blood and energy production. Barley grass juice has anti-viral activities and neutralizes heavy metals such as mercury in the blood.

Both barley grass and wheatgrass can be grown at home. The seeds are sprouted and grown into a grass, which can then be juiced. Alternatively, wheatgrass and barley grass powder are both available from health food shops.

Blue-green algae are microscopic organisms that are naturally present in lakes and streams. Algae is the most nutrient-dense and perfectly-balanced wholefood with an extraordinarily complete content of vitamins, minerals, amino acids, essential fatty acids and live enzymes.

The three most beneficial types of algae are spirulina, chlorella and wild blue-green algae. Each type provides a huge amount of protein, in fact they are a better protein source than meat, and deliver all eight essential amino acids the body needs for repair and maintenance. But unlike animal proteins - which have to be broken down into amino acids before we can use them - proteins from algae can be used immediately.

Studies show that spirulina can help control blood sugar levels and cravings thus making it a key food for diabetics, and can be used to assist in weight loss and as a general nutritional supplement. It has been found to stimulate blood-cell production and is approved in Russia as a "medicine food" to treat blood-cell depletion due to radiation sickness.

Wild blue-green algae is one of the best known food sources of beta carotene, B vitamins and chlorophyll. It has been shown to improve brain function and memory, strengthen the immune system and help with viruses, colds and flu.

Chlorella is amazing for the immune system and for preventing the hardening of the arteries, a precursor to heart attacks and strokes.

These forms of algae are all available from health food stores in powdered form, which can be added to fresh juices or smoothies.

Fresh raw green leafy vegetables contain high doses of chlorophyll, easily digestible proteins, enzymes and a wide range of vitamins and minerals. This group of vegetables are excellent for the blood, provide a health tonic for the brain and immune system and a cleanser of the kidneys.