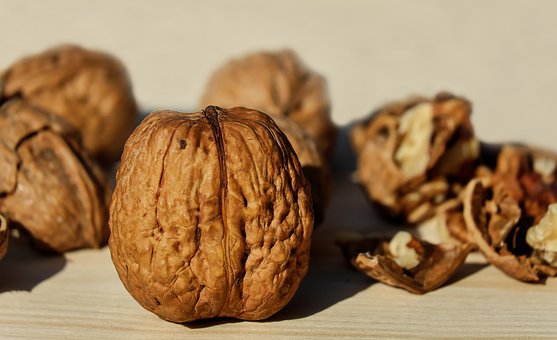 Walnuts are full of beneficial nutrients such as essential fats, and this powerful snack is associated with fighting inflammation, boosting heart health and can even help you sleep well. Two new studies have now linked walnuts to preventing breast cancer and improving brain function.

Walnuts have the highest level of omega-3 fats compared to any other nut. A one-ounce serving contains about 2.6 grams of brain enhancing omega-3 fatty acid. Walnuts are also a good source of B vitamins, especially thiamine, B6, folic acid, and minerals such as phosphorus, magnesium and copper. They are an excellent source of gamma-tocopherol, a type of Vitamin E which has shown to be useful in fighting breast, prostate and colon cancer. Walnuts are rich in ellagitannins, a type of polyphenol that has antioxidant and anti-carcinogenic properties. One of walnut's most valuable effects is in fighting inflammation. Inflammation plays a role in many debilitating and degenerative conditions of the brain and body.

The scholar Ibn al-Qayyim mentioned walnuts in his Prophetic medicine. He said that walnuts, when eaten with figs and almonds on an empty stomach, were "exceeding beneficial in opening up the alimentary passages" and were "nourishing and beneficial to the nerves."

A study in mice has found that those fed walnuts had fewer, smaller breast tumors. Molecular analysis revealed that increased consumption of omega-3 fatty acids, antioxidants and phytosterols found in walnuts contributed to tumor resistance in the mice. "These laboratory mice typically have 100 percent tumor incidence at five months; walnut consumption delayed those tumors by at least three weeks," said the study author.

A Tufts University study has found that adding a moderate amount of walnuts to an otherwise healthy diet can help older individuals improve cognitive performance, especially on tasks that require motor and behavioral skills.

The aging brain undergoes many changes that can result in altered or impaired neuronal functioning. Such disruption can be attributed in part to alterations in "synaptic plasticity," or the ability of the connections between neurons to change in strength and function, and also by increased oxidative damage to neural tissue. In aged rodents, these impairments are seen as poor performance on age-sensitive tests of balance, coordination, and "spatial" working memory.

Walnuts, eaten in moderation, appear to be among other foods containing polyphenols and bioactive substances that exhibit these effects on neural tissue, according to the researchers.

Scientists have found that eating walnuts at the end of a rich meal can counter the effects of inflammation by keeping the arteries flexible. Inflammation causes high blood pressure, strokes, heart disease, and thinning of the bones, leading to osteoporosis. The damage caused by chronic inflammation has also been linked with the development of cancers, and to many other degenerative diseases.

Walnuts as a sleep Aid

Walnuts contain the powerful antioxidant melatonin, which promotes restful sleep. Research found that adding walnuts to the diet increased blood levels of melatonin by three times as much.